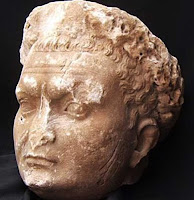 Archaeologists have unearthed a marble head of the Roman emperor Titus, during an excavation outside the southern Italian city of Naples.
So far, the digging in Rione Terra, a cliff in the port town of Pozzuoli, has yielded 12 ancient statues, columns and fragments bearing inscriptions from what appear to be monuments from the Republican and Imperial periods of ancient Rome.

The marble head of Emperor Titus ~ who ruled at the time of the eruption of Mount Vesuvius in 79 A.D. and who was celebrated throughout antiquity for providing generous financial assistance to survivors of the eruption ~ is the most striking find to date. Bearing a crown of laurel leaves, the emperor's head was found in an ancient water tunnel.

Nearby there were four marble busts, plus a frieze portraying two human figures, two figures wearing a toga, and part of an equestrian statue.
Click here for the complete Discovery News article.
Photo is marble head of Titus (39-81 AD) found recently in Pozzuoli.
Posted by Gregory LeFever at 5:03 PM

I see, that your blog needs fresh & unique articles.I know it’s hard to write articles manually every day, but there is the solution for this. You May Also Read or Buy