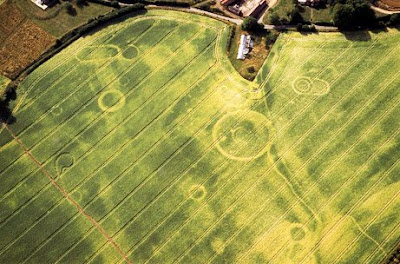 Underground remains of the Bronze Age burial complex are etched into the crops about 15 miles from Stonehenge.
A group of farmland patterns resembling crop circles in southern England have led to discovery of a huge prehistoric ceremonial complex a thousand years older than Stonehenge.
The site includes remains of wooden temples and two massive 6,000-year-old tombs that are among "Britain's first architecture," according to archaeologist Helen Wickstead of Kingston University in London. She said for such a site to have lain hidden for so long is "completely amazing."

Archaeologist Joshua Pollard agreed. The discovery is "remarkable," he said, given the decades of intense archaeological attention to the greater Stonehenge region. "I think everybody assumed such monument complexes were known about or had already been discovered," he told National Geographic.
At the 500-acre (200-hectare) site, outlines of the structures were spotted "etched" into farmland near the village of Damerham, some 15 miles (24 kilometers) from Stonehenge. Discovered during a routine aerial survey by English Heritage, the U.K. government's historic-preservation agency, the "crop circles" are the results of buried archaeological structures interfering with plant growth.

The central features are two great tombs topped by massive mounds called long barrows. The larger of the two tombs is 70 meters (230 feet) long. Such oblong burial mounds are very rare finds, and are the country's earliest known architectural form, Wickstead said. The last full-scale long barrow excavation was in the 1950s.