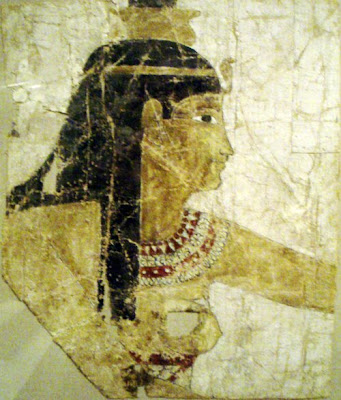 Image of Isis from a 2nd Century AD linen shroud.
Workmen inside the courthouse in Florence, Italy, have uncovered a spiral column and hundreds of multicolored fragments that may have belonged to a Roman temple dedicated to the Egyptian goddess Isis.

Dating to the second century AD, the remains were discovered as the men dug a hole for a new water cistern for the courthouse.

''These finds are of extraordinary importance,'' said Alessandro Palchetti, the archaeologist overseeing the works in the courthouse, who suspected something interesting might be uncovered because of the area's historic relevance.
He said the remains were comparable to others found over the last three centuries in the immediate area that have also been attributed to the temple of Isis, the Egyptian goddess of motherhood and fertility who was later adopted by the Greeks and Romans.

The actual location of the temple is unknown, Palchetti said, but it is believed to have been built just outside the Roman part of the city, near the current courthouse building.

Posted by Gregory LeFever at 6:17 PM