China May Unearth Another 5,000 Clay Soldiers 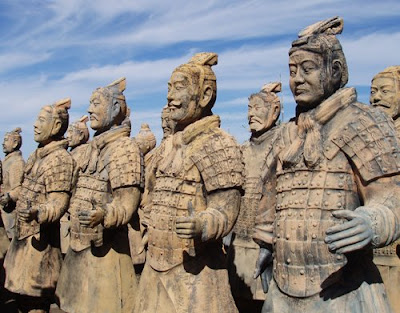 Chinese archaeologists today began a new excavation to find more terracotta warriors in hopes of unraveling the mysteries surrounding the ancient figures buried in the tomb of the first emperor.
The new dig is in the site's largest pit, which is believed to be still hiding around 5,000 of the life-size figures. This is the third excavation in the pit ~ one of three at the site near Xian, the capital of northern Shaanxi province ~ since 1974 when the army of terracotta warriors and horses was discovered by a peasant digging a well.
"This time, the excavation could open many unresolved mysteries, such as whether there are civil servant officials in the pit as well as soldiers," according to an official statement. According to the official China Daily newspaper, the majority of the discovered figures are archers, infantrymen and charioteers that the Qin Emperor, who had the site built, hoped would follow him into the afterlife.
Less than 10 armored generals have been unearthed with the army, part of a burial site for Qin Shi Huang, who presided over the unification of China in 221 BC and declared himself the first emperor of the nation.
In past excavations, according to the China Daily, richly coloured clay figures have turned an oxidized grey when they have been exposed to the air. The Terracotta Army is one of the greatest archaeological finds of modern times, and was listed as a World Heritage Site in 1987.