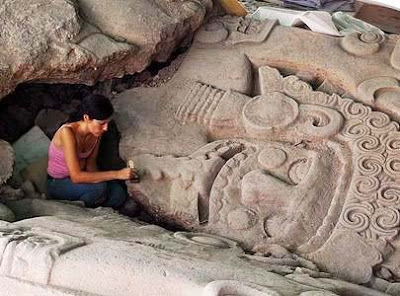 Archaeologist cleans the Tlaltecuhtli monolith, looking for blood samples that would indicate human sacrifices at the site.
Archeologists continue to dig in the dirt and black ooze under Mexico City in hopes of finding the burial place of one of the last Aztec rulers.
"They keep finding astonishing things as they inch their way along," says David Carrasco, a Harvard University historian working with Mexican archeologists at the Templo Mayor.

But the great find – a royal tomb – has eluded scientists. The city of Tenochtitlan, the Aztec capital that lies beneath the modern Mexico City, was founded on an island in the middle of a saltwater lake.
A high water table makes progress difficult. "When you dig a pit or a trench, you find very quickly the water level and cannot continue if you don't have a powerful pumping system," says Leonardo Lopez, the archeologist heading the excavation.

Since he uncovered a carved monolith of the ferocious earth deity Tlaltecuhtli in 2006, there has been intense speculation, based on historical writings and their own discoveries, that the four-metre-by-3.5-metre stone covers a royal tomb.

The stone monolith is inscribed with dates and language associated with Ahuitzotl, a king who died in 1502. Radar indicates "anomalies" under the monolith, which could be funerary spaces.

Though archeological finds in Mexico City date back to 1790, no one has ever found the burial site of an Aztec king.

"Everyone wants us to dig faster," says Lopez, "and this is the only thing we cannot do. You can only excavate once an archeological site. We are not treasure hunters but scientists, and we have a professional responsibility to record the slightest artifact in the best way."

Click here for the Toronto Star article.
Posted by Gregory LeFever at 9:22 PM