Parthenon Once Had Painted Blue Highlights 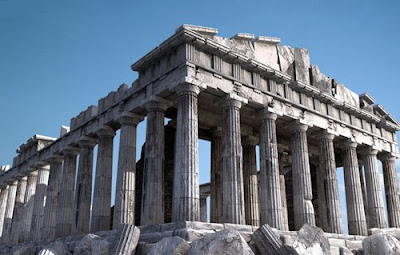 Millennia have stripped away any visible traces of blue paint.
We’re familiar with Greece’s ancient Parthenon as a classic white edifice, but new imaging technology reveals that portions of it originally were painted blue.
The temple ~ sitting atop the Acropolis in Athens ~ dates from the 5th century BC. Its carved statues and friezes show scenes from mythology and are some of the most impressive to survive from ancient Greece. Pigments are known to have adorned other Greek statues and temples, but despite 200 years of searching, archaeologists had found no trace of them on the Parthenon's sculptures.
Until now.
Giovanni Verri, a researcher at the British Museum in London, has developed an imaging technique that's ultra-sensitive to traces of an ancient pigment called Egyptian blue. He shines red light onto the marble, and any traces of paint that remain absorb the red light and emit infrared light. Viewed through an infrared camera, parts of the marble that were once blue will appear to glow.
Egyptian blue has shown up on the belt of Iris, Poseidon's messenger goddess, and as a wave pattern along the back of Helios, god of the sun, who is depicted rising out of the sea. It also appears as stripes on the woven mantle draped over another goddess, Dione.
"This adds another dimension to how we perceive the Parthenon," says Ian Jenkins, also at the British Museum. He believes the temple would originally have looked "jewelled" and "busy." The main pigments used are likely to have been blue and red, with the white stone showing through in parts, as well as gilding.