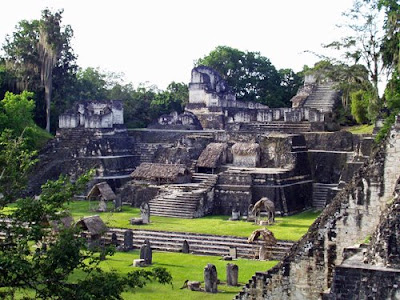 Temple ruins at Tikal, Guatemala.
Builders of ancient Mayan temples at Tikal in Guatemala switched to inferior wood a few decades before they abandoned the city in the 9th century AD. This is the strongest evidence yet that Mayan civilization collapsed because it ran out of resources, rather than dying off due to war or illness.
Researchers have sampled wooden beams from all six major temples and two palaces at Tikal. The first three temples, built before AD 741, used only large, straight sapodilla logs ~ a strong wood that is nevertheless easy to carve.
But after that date, sapodilla was replaced in temple construction by logwood, a smaller tree almost impossible to carve. Researchers believe this indicates the superior sapodilla supply had been exhausted due to ecological over-exploitation.
Earlier studies of pollen deposits have suggested that deforestation and soil erosion increased in the region as Mayan civilization neared collapse.

Posted by Gregory LeFever at 2:48 PM