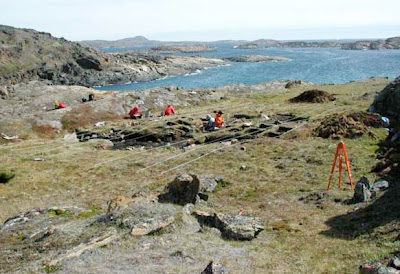 The site on Baffin Island where the Viking dwelling has been unearthed.
Remnants of a stone-and-sod wall unearthed on Canada’s Baffin Island may be traces of a shelter built more than 700 years ago by Norse seafarers. If so, it would be just the second location in the New World with evidence of a Viking-built structure.
Northern Newfoundland's L'Anse aux Meadows ~ about 900 miles southeast of the Nanook dig ~ is the only confirmed location of a Viking settlement in North America. There, about 1,000 years ago, a party of Norse voyagers from Greenland built sod-and-wood dwellings before abandoning their colony under threat from hostile natives.
However, over the past 10 years, research teams led by the Canadian Museum of Civilization's chief of Arctic archeology, Pat Sutherland, have compiled evidence that strongly suggests the Norse presence in northern Canada didn't end with the retreat from Newfoundland.
At three sites on Baffin Island, which the Norse called "Helluland" or "land of stone slabs," and another in northern Labrador, researchers have documented dozens of suspected Norse artifacts such as Scandinavian-style spun yarn, distinctively notched and decorated wood objects and whetstones for sharpening knives and axes. Among the new artifacts found near the sod-and-stone features at Nanook is a whalebone spade, consistent with tools found at Norse sites in Greenland, and which might have been used to cut sections of turf for the shelter.
There is also evidence at Nanook of what appears to be a rock-lined drainage system comparable to others found at proven Viking sites.
Click here for the Canada.com article.

Posted by Gregory LeFever at 6:03 PM