Tomb May Be of Aztec Ruler 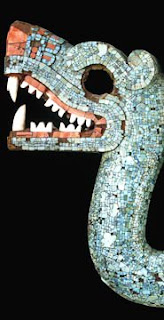 Archaeologists exploring a Mexico City site opened up by earthquake damage believe they have found the first tomb of an Aztec ruler. The site ~ likely the tomb of Ahuitzotl, who ruled from 1486 to 1502 ~ may yield one of the great treasures of antiquity.
The dig is in what was the Aztec capital, Tenochtitlan. Nearby stands the Catedral Metropolitana de la Asunción de María, which was destroyed by the Spanish in 1521. The temple’s ruins were subsequently lost for nearly five centuries and discovered only by accident in 1978. An earthquake in 1985 cleared the way for the present dig.

The new finds appear to be offerings left at the entrance to a tomb. Among them is a fearsome stone sculpture of Tlaltecuhtli, goddess of the Earth, perhaps a capstone to a burial chamber. When archaeologists moved the sculpture in 2007 they found four containers filled with more than 3,000 items, including animal skeletons, a fire god sculpture, blocks of incense and wooden masks.

Archaeologists found several plaster seals, which means that the site has not been looted. Between the seals there are several offerings blocking the entrance, including the skeleton of a dog, an animal that traditionally led the dead to the afterlife.

Click here for the London Times article.
Photo is mosaic serpent statue found at the site.
Posted by Gregory LeFever at 7:35 PM