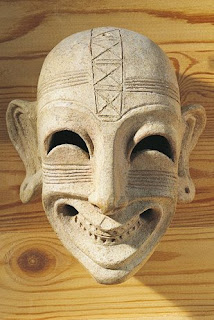 Scientists have determined how ancient Phoenicians created gruesome smiles ~ known as a “sardonic grin” ~ on the dead some 2,800 years ago.
According to National Geographic, elderly people who could no longer care for themselves and criminals "were intoxicated with the sardonic herb and then killed by dropping from a high rock or by beating to death," according to the new study.
For centuries the herb's identity has been a mystery, but study leader Giovanni Appendino and colleagues say they have discovered a sardonic grin-inducing compound in a plant called hemlock water-dropwort.
By the eighth century B.C., Homer had coined the term "sardonic grin" ~ "sardonic" having its roots in "Sardinia" ~ referring to the Sardinia’s ritual killings.

About a decade ago, a Sardinian shepherd committed suicide by eating a hemlock water-dropwort, leaving a corpse with a striking grin.
The death spurred study co-author Mauro Ballero, a botanist at the University of Cagliari in Sardinia, to study every dropwort-related fatality on the island in recent decades.
For the new study, Ballero and colleagues detailed the molecular structure of the plant's toxin and determined how it affects the human body.

Study leader Appendino, an organic chemist from the Università degli Studi del Piemonte Orientale in Italy, said, "The compound is highly toxic and causes symptoms similar to those described by the ancients for the sardonic smile, including facial paralysis."