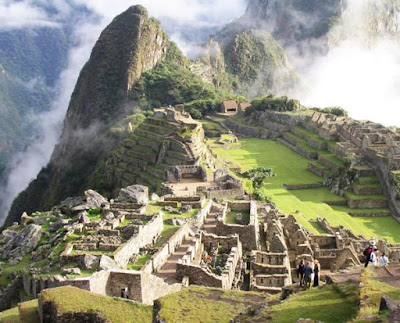 Was Peru’s famed Machu Picchu actually a destination for Incan pilgrimages, offering a scaled-down version of the mythological realm encountered by Incan ancestors?
That’s the contention of a new study that disputes the conventional view that Machu Picchu was a royal estate of the Inca ruler Pachacuti, who built it around A.D. 1460. According to National Geographic:

"I believe that much of the sacred space of the Incas has still to be recognized as such," says study author Giulio Magli, an astrophysicist at the Polytechnic Institute in Milan, Italy.
Perched on a mountain ridge some 8,000 feet above sea level, Machu Picchu was for years lost to history after the Spanish conquest. The site gained notoriety following a 1911 visit by U.S. explorer Hiram Bingham, whose Machu Picchu excavation was funded in part by the National Geographic Society.
According to Magli, Machu Picchu was conceived and built specifically as a pilgrimage site where worshippers could symbolically relive an important journey purportedly taken by their ancestors.
In Inca mythology, the first Inca were created on Bolivia's Island of the Sun on Lake Titicaca. From there, they undertook a harrowing journey beneath the Earth and emerged at a place called Tampu-tocco, close to the future site of the Inca capital Cusco.

Magli argues that certain structures at Machu Picchu symbolize important landmarks of this journey. For instance, a disorderly pile of stones represents the underground "void" that the first Inca traveled through.

"Pacha-Mama, or Mother Earth, was associated with disorder," Magli said. Similarly, a plaza at Machu Picchu represents Tampu-tocco, and a stone pyramid at the site doubles for the Huanacauri hill.