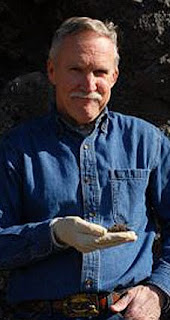 I admit to a gush of local pride when I saw that Archaeology Magazine this week listed the Oregon Paisley Cave discovery among its Top 10 Discoveries of 2008. Here’s part of what the magazine stated:

The remarkable discovery of 14,300-year-old feces in eastern Oregon's Paisley Cave provided the earliest direct evidence of human colonization of the Americas. Known in the laboratory as coprolites, the feces were proof positive that humans lived in North America well before the Clovis people, long thought to have been the first arrivals, around 12,000 years ago. Thanks to a new technique for isolating genetic samples from materials such as ice, soil, and now fecal matter, researchers were able to extract human DNA from the coprolites. The improbable "artifacts" opened a new chapter in the debate over the identity of the first Americans.

The Paisley Cave discovery shares Top 10 honors with the discovery of the Maya sacred blue pigment, the carved record of the belief in the soul as separate from the body, the Wari war mask in Peru, and many others ~ nearly all of which have appeared as posts on Ancient Tides this year.

Posted by Gregory LeFever at 7:45 PM