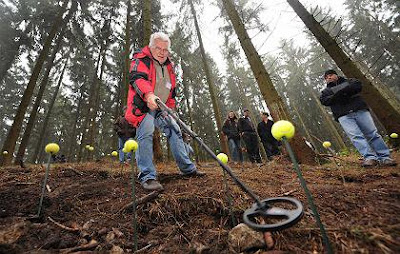 Tennis balls on stakes indicate where weapons and other artifacts have been unearthed on the wooded hilltop near the town of Kalefeld.


Yesterday’s announcement of the discovery of a 3rd Century battlefield between Roman legionnaires and Germanic tribes is the topic of another excellent article, this one in Spiegel Online.

Finding evidence of Roman fighting forces so far north is surprising, archaeologists say. Germany was once considered prime territory for Roman conquest. But in 9 AD thousands of Roman legionaries were slaughtered in a forest near modern-day Bremen, the article notes.

"We thought that with the Battle of the Teutoburg Forest, the Romans gave up on this region and pulled back behind the limes," or frontier fortifications further south, Henning Hassmann, the Lower Saxony Conservation Department's lead archaeologist, told Spiegel.

But evidence found in woods outside the small town of Kalefeld may force historians to take a new look at the Roman presence in Germany. More than 600 artifacts, ranging from axe heads and wagon parts to coins and arrowheads, have been found on a forested hill called the Harzhorn.

Posted by Gregory LeFever at 11:38 AM