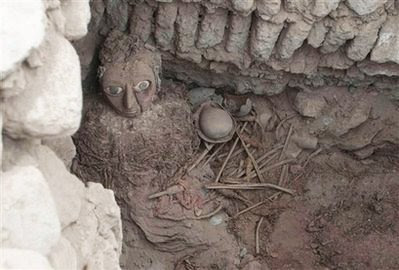 Archaeologists in Lima, Peru, have unearthed a well-preserved 1,300-year-old female mummy. The woman was likely a noblewoman from the Wari culture, an Andean society that thrived between 600 and 1100 AD.

“It is an important find because we have found over the years several tombs that had been looted, but never one that was intact,” said archeologist Isabel Flores. She described the find as “a multiple tomb in which three funeral bundles were found – one with an impressive mask with the human characteristics of a woman.” 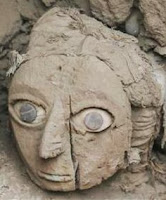 The tomb was located in what is now a residential neighborhood of the capital city and was buried within an ancient pyramid called Huaca Pucllana. Other remains in the tomb are of two other adults and a child who may have been the victim of human sacrifice. The tomb also contained textiles and ceramics.

The mask has an aquiline nose, narrow lips, and large eyes with white irises and round black pupils. The Waris are known to have attached funeral masks to the mummies of noble women. Archaeologists who made the discovery refer to the mummy as “The Lady in the Mask.” 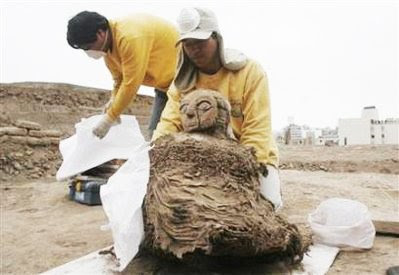 That could scare you big time if you were out digging and came upon her! She rather reminds me of my French wig stand's big eyed face.