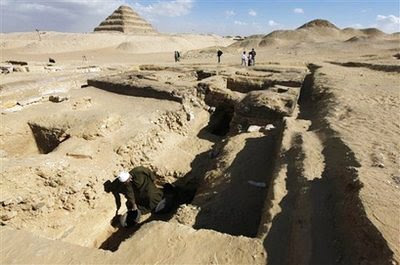 Workers continue digging around openings of the newly discovered tombs at Saqqara, south of Cairo. 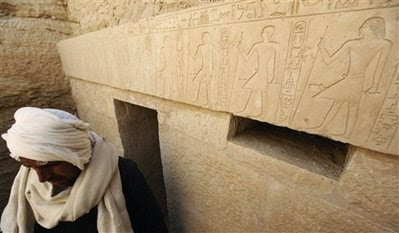 Panels of hieroglyphics adorn the entrances to both tombs.

Egyptian archaeologists have found the tombs of two court officials ~ one in charge of pyramid-building, the other of music ~ from the reign of Pharaoh Unas.

One belonged to Iya Maat, supervisor of pyramid-building under the reign of Unas. He organized the acquisition of granite and limestone from Aswan and other materials from the Western Desert.

The second tomb housed the remains of Thanah, who was in charge of singers in the court of Unas. The entrance of Thanah's tomb shows carved images of her smelling lotus flowers.

Both tombs feature hieroglyphics at their entrances but the contents of the tombs have long since been stolen, Hawass said, adding that 70 percent of Egypt's ancient monuments remain buried under sand.

The death of Unas brought to an end the fifth dynasty, as he did not have a male heir. His daughter is widely believed to have become a queen to the first king of the sixth dynasty, which is considered to be the last dynasty of the Old Kingdom (2613-2494 BC), after which Egypt descended into famine and social upheaval.

Posted by Gregory LeFever at 11:35 AM

Two Australian men have purchased a papyrus from a deceased estate in Western australia which turned out to be real, from the tomb of Tchaenhoy 1100BC. In effect a lost treasure. The papyrus was found with another tourist papyrus which had been specifically drawn to hide the real papyrus when placed over the top of it in a frame. The papyrus was also found with a painting by Vlase Zanalis called "The Miner" which turned out to be a famous painting owned by Claude de Bernales a famous Mining entrepeneur from France who supplied the finance to the Kalgoorlie gold mines in Western australia in the early 1900's. Claude de Bernales father was a Basque General living in France in the mid 1800's, the French military controlled all Egyptian antiquities at the time and somehow this piece came into his hands and ended up in his sons estate. See the pictures of the real thing at http://viewmorepics.myspace.com/index.cfm?fuseaction=user.viewPicture&friendID=434946894&albumId=846273. The original "Book of the dead"- "Judgement Scene" of Tchaenhouy has had a signature added and two false cartouches at either end to hide it and to make it seem like a tourist item. The other fake papyrus was drawn to hide it, the cartouches at either end fit into each other as do the heiroglyphics within them, also the male and female figure in the main scene exactly cover all the figures and heiroglyphics at the top in the main scene of the real Tchaenhouy papyrus. Tchaenhouy was a Pharoah around 1100 BCE and ruled between the 2oth and 21st dynasty. This find was reported in "The Sunday Times" in Western Australia in March 2007. The find is being examined and tested forensically by Dr. R. John Watling of the University of Western Australia