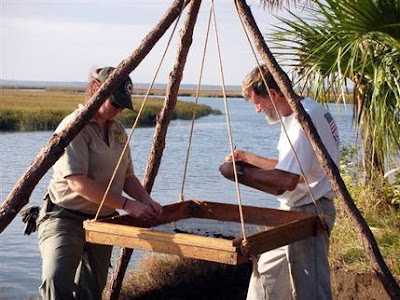 
Archaeologists have discovered an unusual American Indian cremation pit on an island six miles off the coast of Savannah, Georgia, containing bones of fingers or toes, mixed with charcoal, bits of burned logs and pottery shards 1,000 to 3,000 years old.

According to the Associated Press, the find has led researchers to suspect that American Indians used the ancient pit to burn bodies of the dead, making it a rare example of cremation among the early native inhabitants of the southeastern U.S.

"It's a special sort of burial," said Tom Gresham, an archaeologist who worked on the excavation and serves on Georgia's Council on American Indian Concerns. "The way Indian tribes over time buried their dead varied tremendously. But cremations are fairly rare."

The site of the pit is on Ossabaw Island, one of Georgia's wildest barrier islands. Researchers have found evidence that humans came to Ossabaw more than 4,000 years ago. It's believed Indians at first may have used the island as a winter camp to feed on shellfish before moving inland to hunt deer in the spring.

Burial mounds on Ossabaw typically hold intact human remains. Archaeologists believe the cremation pit dates to the Woodland Period between 1000 B.C. and 900 A.D. They hope to narrow that time period by carbon dating the charcoal from the pit.

Posted by Gregory LeFever at 10:26 AM