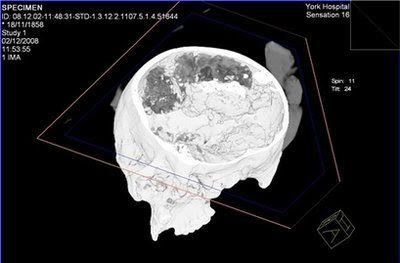 British archaeologists have unearthed an ancient skull containing an unusually well-preserved brain. Scientists said Friday the gray matter was more than 2,000 years old — the oldest ever discovered in Britain.

One expert unconnected with the find called it "a real freak of preservation." The skull was severed from its owner sometime before the Roman invasion of Britain and found in a muddy pit during a dig at the University of York in northern England this fall, according to Richard Hall, a director of York Archaeological Trust.

Finds officer Rachel Cubbitt realized the skull might contain a brain when she felt something move inside the cranium as she was cleaning it, Hall said. She looked through the skull's base and spotted an unusual yellow substance inside. Scans at York Hospital confirmed the presence of brain tissue.

Hall said it was unclear just how much of the brain had survived, saying the tissue had apparently contracted over the years. Parts of the brain have been tentatively identified, but more research was needed.

"This brain is particularly exciting because it is very well preserved, even though it is the oldest recorded find of this type in the U.K., and one of the earliest worldwide," she said. It’s a mystery why the skull was buried separately from its body, suggesting human sacrifice or ritual burial as possibilities.

Far older preserved brains ~ thought to be approximately 8,000 years old ~ were found in 1986 when dozens of intact human skulls were uncovered in a peat bog in Windover Farms in Florida. 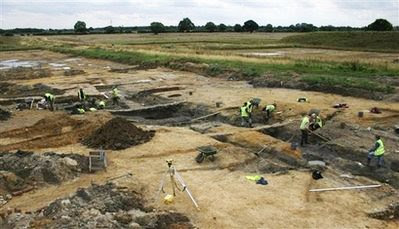 Excavating continues at the University of York in northern England where the 2,000-year-old skull was found.

Posted by Gregory LeFever at 7:15 PM