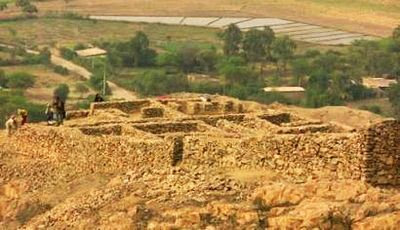 The discovery of this entire ancient Wari city in northern Peru were announced today at the Cerro Patapo archaeological site.


Researchers digging in northern Peru have discovered the ruins of an entire city that may provide the "missing link" between two ancient cultures.

According to a report on Reuters, scientists say the find ~ located 14 miles from the Pacific coast city of Chiclayo ~ likely dates to the Wari culture, which existed in what is now Peru between about 600 and 1100 AD. If these assumptions prove correct, the discovery would connect the ancient Wari civilization to the Moche culture, which flourished from about 100 AD to 600 AD.

Researchers say the buried city includes ceramics, bits of clothing and the well-preserved remains of a young woman. It also shows evidence of human sacrifice, with special spots designated for the purpose and a heap of bones at the bottom of a nearby cliff.

"It provides the missing link because it explains how the Wari people allowed for the continuation of culture after the Moche," Cesar Soriano, chief archaeologist on the project, told Reuters.

The Wari people made their capital near modern-day Ayacucho, in the Andes, but travelled widely and are known for their extensive network of roads. Earlier this year, archeologists at the Huaca Pucllana ruins in Lima, located some 500 miles south of Chiclayo, discovered a mummy that is also thought to be Wari.

Posted by Gregory LeFever at 11:52 AM