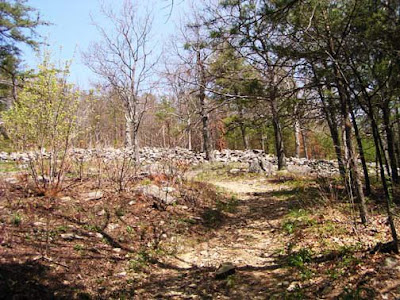 A portion of the 855-foot stone wall at Fort Mountain, perhaps built by early Welsh explorers. 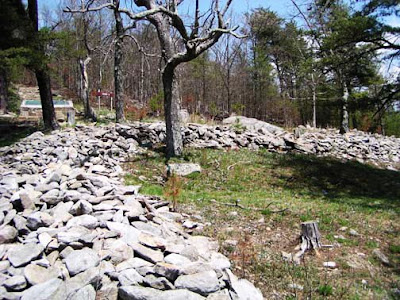 One of the stone wall's circular 'pits' formed likely for defensive purposes.


More evidence is pointing to the potential validity of expeditions by Welsh explorers in the southern portion of North America some 300 years before Columbus set sail. As the legend goes, the group arrived at Mobile Bay around 1170, made their way up the Alabama and Coosa rivers and built stone fortifications at several spots near present-day Chattanooga, Tenn.

Dana Olson, an author who has spent decades trying to prove the legend, said circumstantial evidence on both sides of the Atlantic is too compelling to ignore.

"I've traveled all over the country finding these forts. Some of them are pretty well known, but I'm still uncovering some of them," Olson, author of The Legend of Prince Madoc and the White Indians, told the Associated Press.

The stone structures have long been a topic of debate. Many scientists have come to believe that the walls at Fort Mountain in Georgia and other Southeast sites were built by native Americans between 200 B.C. and A.D. 600.

"We're not exactly sure what purposes these enclosures served," said Wood, the UGA archaeologist. "But they were likely well-known gathering places for social events. Seasonal meetings of friends and kin, trading of goods, astronomical observance, and religious or ceremonial activities may have occurred there."

Yet supporters of the Madoc legend say the wall's tear-shaped designs are similar to ruins found in Wales or elsewhere in Great Britain.

They cite an 1810 letter from John Sevier, the first governor of Tennessee, who said that in 1782 he was told by an Indian chief that the walls were built by white people called the Welsh who lived in the region before the Cherokee.

They were driven out with the promise that they would never return to Cherokee lands, Sevier said in the letter, and they supposedly traveled to the Ohio valley or downstream to the Mississippi. There is also evidence of a major battle between 1450 and 1660 at the Falls of the Ohio, which Olson said was the scene of the "big battle began between the red Indians and the white Indians" ~ the Welsh.

Posted by Gregory LeFever at 3:26 PM