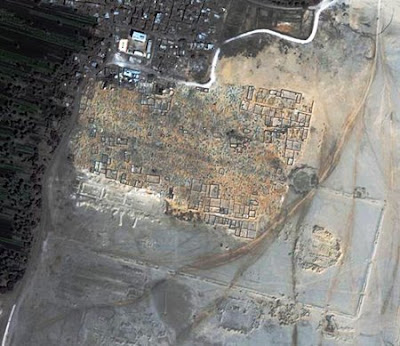 Even though the northern enclosure wall of the Great Aten Temple is buried beneath a modern Egyptian cemetery, using Quickbird high resolution satellite imagery, it's possible to see the buried wall.


Archaeologists are making important new discoveries with the help of high-tech equipment, but most believe they have only skimmed the surface of the existing ancient sites.

"Everyone's becoming more aware of this technology and what it can do," Sarah Parcak, an archaeologist who heads the Laboratory for Global Health at the University of Alabama at Birmingham, recently told CNN. "There is so much to learn."

In the past decade the resolution of images from commercial satellites has sharpened enough to be useful to archaeologists. Today, scientists can use them to locate ruins ~ some no bigger than a small living room ~ in some of the most remote and forbidding places on the planet.

Parcak’s work in Egypt has yielded hundreds of finds in regions of the Middle Egypt and the eastern Nile River Delta. She conducted surveys in the eastern Nile Delta and Middle Egypt in 2003 and 2004 that confirmed 132 sites that were initially suggested by satellite images, according to CNN. Eighty-three of those sites had never been visited or recorded.

In the past two years, she has found hundreds more, she said, leading her to amend an earlier conclusion that Egyptologists have found only the tip of the iceberg.

"My estimate of 1/100th of 1 percent of all sites found is on the high side," Parcak said.

Archaeologists working in much more verdant climates ~ such as Cambodia and Guatemala ~ also have used the technology to locate undiscovered ruins. They are able to see similarities between the vegetation at known sites and suspected sites that showed up in fine infrared and ultraviolet images covering wide areas of forbidding terrain.

"For the work I do [in Egypt], I need wet season images as wet soil does a better job at detecting sites with the satellite imagery data I use," Parcak said. "I can pick the exact months I need with the NASA satellite datasets."

Posted by Gregory LeFever at 1:02 AM