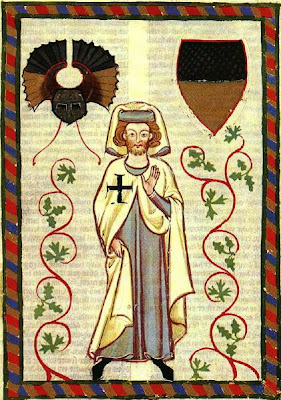 Illustration from the circa 1305 Manesse Codex showing the habit of a Teutonic knight. The helmet, however, is consistent in style with those of the secular figures depicted in the Codex.

Three silk-draped skeletons found in a cathedral crypt have been identified as grand masters who ruled the Teutonic Knights in the 14th and 15th centuries.

An archaeologist in the city of Kwidzyn — the Teutonic fortress of Marienwerder in the Middle Ages — said today that DNA tests indicate the remains are those of Werner von Orseln, the knights' leader from 1324-1330; Ludolf Koenig, who ruled from 1342-1345; and Heinrich von Plauen, who reigned from 1410-1413.

"Taking everything into account, we see that we are dealing with Teutonic Knights grand masters," Bogumil Wisniewski, an archaeologist who spearheaded the search, told The Associated Press. "We are 95, 96 percent sure it is them."

He said the skeletons were found in wooden coffins and draped in silks, some painted with gold. DNA tests matched their age to that of the death age of the three grand masters. They also revealed temporary malnutrition in one of the skeletons that could match the 10-year imprisonment of von Plauen.

While Wisniewski acknowledged he could only be completely certain of the identities "if I met each face-to-face and he told me his name," he said several other indicators supported the find, including wall paintings in the cathedral showing the three grand masters and historic documents saying that von Orseln and Koenig were buried there.

The Order of the Teutonic Knights was founded in the late 12th century to aid German pilgrims in the Holy Land. It became a military order, wearing trademark white coats with black crosses, forcefully bringing Christianity to pagan Prussians. It was crushed by Polish and Lithuanian forces at the Battle of Grunwald in 1410.

Posted by Gregory LeFever at 8:44 PM