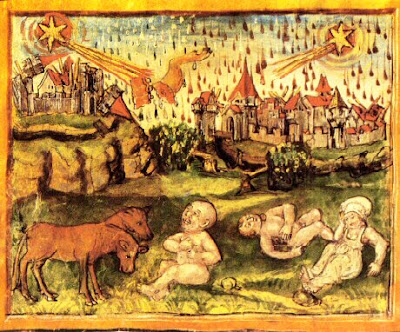 Nanodiamonds ~ produced under high-temperature, high-pressure conditions created by cosmic impacts and have been found in meteorites ~ are concentrated in similarly aged sediments at sites in Arizona, Oklahoma, Michigan, South Carolina and at two additional sites in Canada.

According to ScienceDaily, last year a team of scientists proposed that a cosmic impact event ~ possibly multiple airbursts of comets ~ set off a 1,300-year-long cold spell known as the Younger Dryas and led to the extinction of a large range of animals, including mammoths, across North America.

Now, reporting in today’s issue of the journal Science, a team led by the University of Oregon's Douglas J. Kennett, a member of the original research team, report finding billions of nanometer-sized diamonds concentrated in sediments ~ weighing from about 10 to 2,700 parts per billion ~ in the six locations during digs funded by the National Science Foundation.

"The nanodiamonds that we found at all six locations exist only in sediments associated with the Younger Dryas Boundary layers, not above it or below it," Kennett, a UO archaeologist, told ScienceDaily. "These discoveries provide strong evidence for a cosmic impact event at approximately 12,900 years ago that would have had enormous environmental consequences for plants, animals and humans across North America."

Posted by Gregory LeFever at 10:29 AM