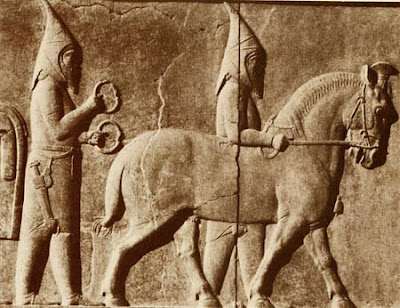 Archaeologists fear the warming of central Asia’s climate will endanger their research into the ancient Scythian culture. In recent years scientists have unearthed graves and recovered rare artifacts preserved by the region’s icy temperatures. The discoveries have greatly expanded the world’s knowledge of the people who ruled from Siberia to Egypt 3,000 years ago.

“Right now we’re facing a rescue archeology situation,” Parzinger says. “It’s hard to say how much longer these graves will be here.”

Geographer Frank Lehmkuhl of the University of Aachen in Germany noted, “According to our research, the glaciers are retreating and the lakes are rising. With no increase in the region’s rainfall, that change can only come from melting permafrost and glaciers.”

Ice has helped preserve a number of Scythian mummies in Mongolia’s Altai Mountains. Some of the best-preserved bodies were found in wooden underground chambers that were lined with felt blankets and wool carpets. The mummies—which had undergone a primitive form of embalming and then been frozen by the harsh climate—were clothed, displayed elaborate animal tattoos and were surrounded by weapons, ornaments and other relics.

The degree of preservation has been remarkable, with archaeologists learning much more about the Scythians, whom the Greek historian Herodotus described as murderous nomads. The Scythians had no written language and no real empire. Their origin and language remain unknown. 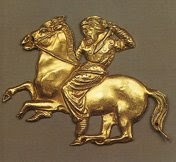 Nomads who spent almost all of their time on horseback—desiccated corpses of horses have been found in some of the Scythian tombs alongside human corpses—they are generally regarded as having been a bloodthirsty people, who for 1,000 years swept back and forth across the steppes, killing many and sparing only those they wished to keep as slaves.

Their women fought as warriors alongside the men, giving rise to speculation about a link between the Scythians and the legendary Amazons. A fierce confederation of Sarmatians eventually forced the Scythians into the Crimean peninsula, where by 300 AD their culture had dwindled and disappeared.
At top is ancient depiction of Scythians; middle photo shows opened Scythian tomb; gold warrior plaque was recovered from one of the Scythian burial tombs.
Click here for the Discover magazine article on the archaeological effort.
Click here for more about the Scythian culture and artifacts.
Posted by Gregory LeFever at 3:19 PM