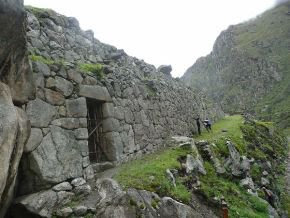 An archeologist last week discovered the skeletons of around 15 people plus several textile and pottery relics in a hidden tomb at Machu Picchu in Peru.
The tomb was concealed in a cave near the tracks of the modern railroad leading to the citadel of the famous Incan ruins.

“This is a very important discovery because humidity and the passage of time usually damages funerary bundles and clothes of long-buried people,” said Machu Picchu Archeological Park Director Fernando Astete in making the announcement today. “It’s unusual to find textiles in such good condition.”

He said the textiles are knitted and dyed orange, but the material has not been identified.

The discovery was made by archeologist Francisco Huarcaya. Excavation of the tomb is scheduled to begin so the remains can be exhumed in September. Scientific analysis will determine the number of people buried in the tomb as well as whether the relics are Incan or belong to another culture.

Machu Picchu was built in the 15th century and abandoned a century later. The spectacular ruins came to the attention of archeologists in 1911 when Peruvian villages led historian Hiram Bingham to the site.
Click here for Peru News Agency article.
Photo courtesy Peru News Agency

Posted by Gregory LeFever at 4:59 PM