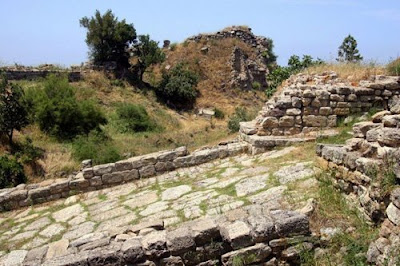 Ruins at the presumed site of Troy.
Archaeologists have determined that the legendary city of Troy was considerably larger than earlier thought.

Ernst Pernicka, professor of Archeometry at the University of Tuebingen and who is in charge of excavation activity at the site, this week told German media that archaeologists recently discovered a defensive trench indicating a larger perimeter for the Bronze Age city.

Scholars earlier believed that Troy encompassed 66.7 acres. The trench, however, has prompted the revision to 86.5 acres (27 up to 35 hectares).

Posted by Gregory LeFever at 1:00 PM