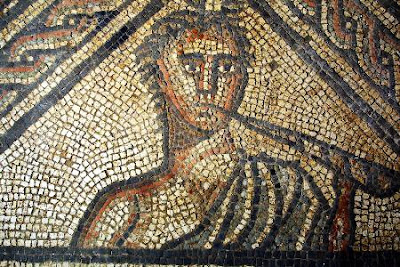 This mosaic depicting Orpheus is from the Roman villa unearthed several years ago, near where the larger and older villa has been discovered.
Archaeologists have discovered one of the largest and best-preserved Roman villas yet discovered in Britain. It is located on the Isle of Wight near the site of another villa found five years ago in the town of Brading.
“It would have sung out the status of the owner,” Sir Barry Cunliffe, emeritus professor of European Archaeology at Oxford University and head of the excavation, told The London Times yesterday. “It's a very impressive building, absolutely magnificent. It could have been seen for miles around.”
The 1,800-year-old villa is located near another Roman villa unearthed in 1879 at Brading. The most recently discovered villa – about 150 years older than the other one -- is similar in layout to a church, with a central nave and two side aisles. Massive pairs of timbers supporting the roof would have soared up to 20 feet in height.
Sir Barry likened it to a medieval hall with the lord of the manor living at one end and a communal space for the estate's inhabitants at the other.
The residential part had under-floor heating and walls plastered and painted with mock marble patterns. The communal end would have been used for meetings and legal matters such as boundary disputes and payment of dues.
Although the Victorians explored this part of the site in the 1880s, they dismissed the remains as a barn. Sir Barry said: “They didn't understand what they were excavating. But this was the main building for at least 150 years before the other villa was put up.”
The symmetry and precision of the construction reveals the extraordinary skill of its builder. The tops of the pier bases are all level to within half an inch. The discovery is so noteworthy that about 30 archaeologists from America and Europe are involved in the effort.
Click here for the London Times article.
Posted by Gregory LeFever at 5:27 PM