Mayan Road to Underworld is Found 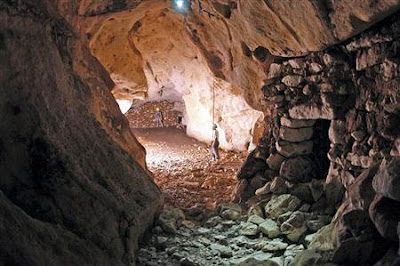 Part of an underground Mayan temple discovered in the Yucatan.
Archaeologists in the Yucatan Peninsula said this week that the underground caves they’ve explored during the last five months there are part of the ancient Mayan road to Xibalba, mythical land of the dead.

Ancient Mayan scripture describes the route to Xibalba as frightening, with underground rivers filled with scorpions, blood and pus. Houses along the route were shrouded in darkness and swarming with shrieking bats. Souls of the dead traveled this horrifying route by following a mythical dog who could see in the darkness.

“They believed this place was the entrance to Xibalba,” says Guillermo de Anda, a leading investigator at the site. “That’s why we’ve found the offerings.” He referred to the stone carvings, pottery and human bones left in the underground temples for the deceased souls. Most of the artifacts date to between 700 and 850 AD.

Different Mayan groups in southern Mexico, northern Guatemala and Belize had their own entrances to Xibalba, several of which have been discovered in those places. Almost always they are underground cave systems deep in the jungle, with subterranean temples connected to above-ground ones.
Click here for the Reuters news article.

Posted by Gregory LeFever at 12:38 PM