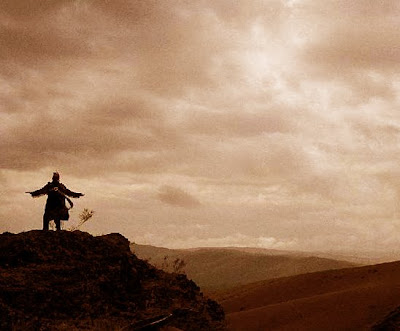 Shaman's mountaintop ritual in southern Siberia.
Meditation and shamanic ritual may have been a factor provoking the genetic change that, about 200,000 years ago, separated Neanderthal man from the modern human.

This unusual proposition has been put forth by psychologist Matt J. Rossano in a recent issue of the Cambridge Archaeological Journal and written up on Smithsonian.com. “We have decent evidence that shamanistic rituals may go very deep into history, and that these rituals might have had positive psychological effects,” Rossano says. Shamanic rituals – often involving groups sitting for hours or days at a time – strengthened parts of the Neanderthal brain. As the neural areas associated with attention and memory grew stronger, the brains of descendent generations were better able to hold information and to make connections such as we do with modern working memory. This led to the ability to comprehend complex symbolism, and presumably, a genetic change in the structure of the brain.

Symbolism became apparent by 50,000 years ago in cave paintings. “If you’re going to use symbols, you have to be able to think abstractly and hold one thing in mind while recognizing that the literal thing is not really its meaning,” Rossano says.

Even today, practicing meditation has measurable effects on our brains. Harvard neuroscientist Sara Lazar discovered in 2005 that the brains of meditators were generally more developed in certain parts, especially those pertaining to attention, according the Smithsonian article.
Click here for the article on Smithsonian.com.
Posted by Gregory LeFever at 9:57 PM