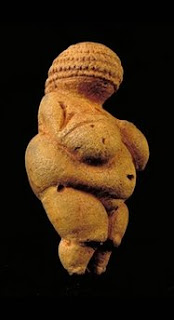 She’s a mere four inches tall and is known for her ample curves plus the fact that she was carved about 25,000 years ago, making her one of the world’s earliest depictions of a woman. She was created during the Paleolithic era when wooly mammoths and bison roamed the area of Austria where an archeologist found her 100 years ago this month.

She’s known as Venus of Willendorf after the village where she was unearthed. Her creators remain unknown but similar statues have been found in France and Russia. Their purpose - fertility charm, goddess, or even good-luck charm - remains equally mysterious.

Austrians are celebrating their Venus with a new postage stamp and even reproductions in chocolate, marzipan and soap.

“She’s very corpulent but still very beautiful,” says Walpurga Anti-Weiser of Vienna’s Natural History Museum, who has written a book about Venus of Willendorf. “One gets the feeling she has become an icon.”

Click here for the Associated Press article.
Posted by Gregory LeFever at 12:23 AM