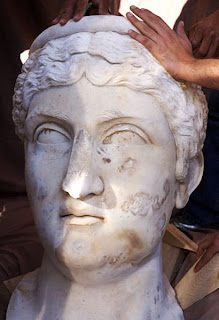 Archaeologists this week in Turkey unearthed a colossal portrait head of the Roman empress Faustina the Elder, wife of Antoninus Pius, who ruled the Roman Empire from 138 to 161 AD.

The head is 2.5 feet tall with large almond-shaped eyes, fleshy lips, and hair parted in the middle and swept around the ears toward the back.

The Faustina head was discovered facedown only 20 feet from last year’s discovery of parts of a 16-foot statue of the emperor Hadrian, who ruled from 117 to 138 AD. Both statues are from the largest room of the Roman Baths at Sagalassos, Turkey, which have been the site of an archaeological dig for 12 years now. Archeologists at the site believe more fragments of statues soon will be discovered there.
Click here for the article in Archaeology Magazine.
Click here for the BBC News article.
Posted by Gregory LeFever at 12:18 PM