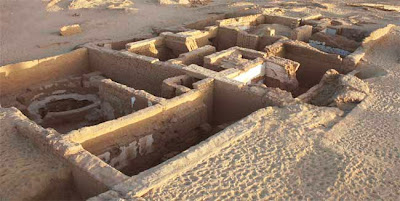 Ruins of an upper-class house in Amheida.
Archaeologists are exploring another face of ancient Egypt ~ a city named Amheida, marooned on an oasis deep in Egypt’s western desert.  The latest in a chain of discoveries in a site dating back at least 5,000 years, are roof-covered streets, providing a glimpse into ancient rural life under the Egyptian sun.

At Amheida, archaeologists led by Roger Bagnall at New York University have sifted through the remains of a settlement far removed from the thoroughfares of the Nile Valley. The site is in the Dakhleh Oasis, 500 miles from Cairo and 185 miles from Luxor, a religious and political hub of ancient Egypt.

The archaeological work has yielded a treasure trove of art and writing. Through this rural lens, archaeologists are shifting their notions of education in ancient Egypt during the Greek and Roman empires. And they have noticed deep connections between powerful central governments and the outposts in the oases.

People settled in the area at least 5,000 years ago during the Neolithic period, as agriculture began. At that time, the climate was wetter and residents were surrounded not by a savanna. Bagnall suspects that Egypt's first farmers may have worked in the oasis before agriculture arrived in the Nile Valley.

“They may well have contributed something to the development of Egypt before the time of the pharaohs,” Bagnall said.

Click here for the complete LiveScience article.
Posted by Gregory LeFever at 6:11 PM