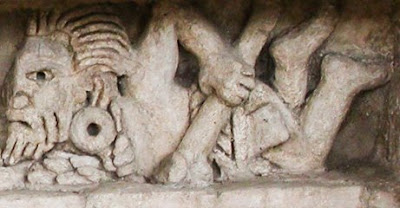 Carving of a Zapotec ruler holding a human femur.
Centuries-old stone carvings in southern Mexico indicate that Zapotec men brandished human thighbones as status symbols.
"The thought was that the femurs are those of the ancestors of the rulers, serving like staffs of office or symbols of legitimacy," archaeologist Gary Feinman of the Field Museum in Chicago recently told National Geographic.

Flourishing from about 500 B.C. to A.D. 1000 in the Valley of Oaxaca, the Zapotec were contemporaries of the ancient Maya and Aztec. Prior excavations had revealed a Zapotec tomb where nine femurs were missing. But the skeletons were a bit of a jumble, so it wasn't clear whether the bones had been taken or had simply gone missing.

"I believe removal of the femur from a male was one way the ancient Zapotec asserted dynastic continuity," said archaeologist Joyce Marcus at the University of Michigan, who did not participate in this study.