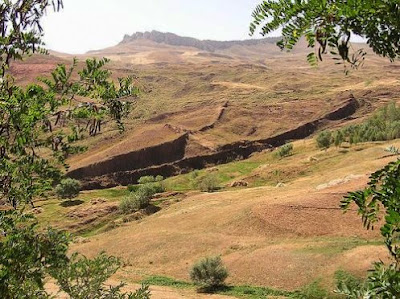 The form on Turkey's Mt. Ararat often cited as the ark's resting place.
Scientists continue to haggle over whether the Biblical account of the “Great Flood” is historical fact or simply myth. So far, evidence points to some sort of climactic catastrophe occurring several millennia ago, but its scope and magnitude are up for debate.

The Epoch Times yesterday ran a summary of the research's current status. Here are some of the main points:

Contemporary hypotheses suggesting that the rapid growth of the Black Sea was a consequence of an incredible rainfall of planetary proportions has never received great sale. Based on a large framework of scientific laws, predominantly geological, which have been established on the basis of empirical observation over the years, makes this a rather improbable scenario.

In the first place, skeptical geologists propose that for such a flood to have occurred, we would find a similar stratum throughout the world covered with pebbles, sludge, boulders, and other elements. It is curious that this layer cannot be found, even more so when the flood narrated by the Bible had taken place in a time as recent as 3000 B.C.
Neither can be found the strata of fossils, with different animal and vegetable species occupying specific soil layers. According to flood logic, the animal remains of all species before the big flood (including the extinct dinosaurs) should be found today in only one stratum, without any distinction. But paleontology completely contradicts these suppositions.

Then there’s the fact that, as with the account of Jesus Christ, the nearly identitical story has been told in other cultures, in earlier times.

With respect to non-Biblical myths about a purifying flood, these can be found in the Hindu, Sumerian, Greek, Acadia, Chinese, Mapuche, Mayan, Aztec, and Pascuanese (Easter Island) cultures, among others. Several of these stories appear to possess surprisingly similar common factors.

Among the most repeated themes are those of celestial announcements ignored by the people, the great flood itself, the construction of an arc to preserve life from the flood, and the later restoration of life on the planet.