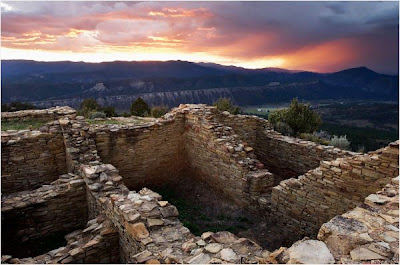 Chacoan ruins at Chimney Rock.
New findings from the Chimney Rock archaeological site in southern Colorado suggest that elite members of the Chaco culture dined on elk and deer, catered to them by commoners living in the valley below.
Colorado University Professor Steve Lekson, who is directing the excavation, said the royalty at Chimney Rock ~ an "outlier" of the Chaco Canyon culture centered in northern New Mexico that ruled the Southwest from about A.D. 850 to 1150 ~ were likely tended to through a complex social, economic and political network.
"While our analysis has only begun, there might have been two different groups at Chimney Rock ~ those that built it, and the elites that inhabited it," said Lekson.
Chimney Rock is one of scores of Chaco outliers in the Southwest and perhaps its most dramatic, seated at 7,600 feet above the San Juan Basin. The site is marked by a pair of twin rock spires, and harbors a Chacoan-like "Great House" and great kiva that some archaeologists believe were built as part of a lunar observatory.
Click here for the complete University of Colorado article.
Posted by Gregory LeFever at 12:56 PM