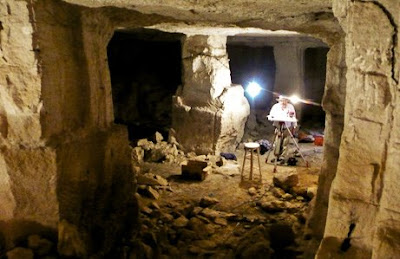 Archaeologists explore the one-acre former Christian hideout.
A 2,000-year-old underground chamber recently discovered in the Jordan Valley is being called the largest human-made cave in Israel. The one-acre space likely began as a quarry but later may have served as a monastery, hideout for persecuted Christians, or Roman army base, experts say.

Archaeologists found the cave in March. As they were about to enter, two Bedouins appeared and warned that hyenas and wolves inhabited the cave. But team leader Adam Zertal told National Geographic that once underground "our eyes opened to see something unimaginable."

The archaeologists peered into a huge hall lined with 22 thick pillars—giving the "impression of a palace," added Zertal, of the University of Haifa in Israel. "We didn't have much light ~ it was complete darkness ~ but even with the torches, we saw how glorious it looks."

Etched into those columns were 31 Christian crosses, Roman letters, a Zodiac sign, and what looks like the Roman army's pennant ~ all of which surprised the researchers.

"It surely was not just a quarry," Zertal said.

Click here for the National Geographic article.
Click here for several more photos of the cave.
Posted by Gregory LeFever at 8:46 PM