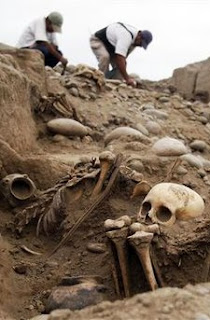 A pre-Incan mummy and eight other skeletons have been unearthed in the middle of Lima, Peru, archeologists said yesterday.

Urban squatters had lived in a shantytown above the Huaca Huantille ruins for years, unaware they contained an ancient burial site, Reuters reported.

Archeologist Roberto Quispe working on the excavation said the bones were from the Ychsma civilization dating from between 1000 and 1400 AD.

The burial site was found after city officials kicked out 50 homeless families that had built a shantytown on the ruins, and later started excavations. Hundreds of archeological sites are scattered across Lima, and in some cases Catholic churches or mansions were built on top of Inca ruins after Spanish conquistadors arrived in Peru.
Posted by Gregory LeFever at 9:47 AM