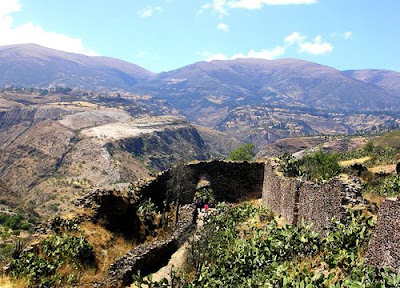 Remains of Wari structures on the slopes of the Andes.
New research indicates that prehistoric communities in Peru’s Andes Mountains 2,800 years ago regularly ate maize, otherwise known as corn. Growing it on the rugged slopes stimulated ancient population growth in the Andes and allowed a complex society ~ the Wari ~ to develop, according to bioarchaeologist Brian Finucane in the August Current Anthropology.
Wari society included a central government and other elements of modern states. It lasted from around 1,300 to 950 years ago and predated other Andes civilizations, including the Inca. According to the current issue of US News & World Report:

Scientists disagree about when and how civilizations formed in the Andes. One theory holds that complex societies, which perhaps fell short of states with centralized bureaucracies, first appeared at least 3,600 years ago in fishing villages along Peru’s coast and then spread inland.
Based on remains of various wild and domesticated plants found at inland sites, other researchers suspect that agriculture had an especially big impact on the establishment of highland societies, beginning roughly 2,500 years ago. Questions also remain about whether prehistoric Andean civilizations depended primarily on maize or on a suite of crops including potatoes and beans.

“These new findings indicate that intensive maize agriculture was the economic foundation for the development of the Wari state,” says Finucane, who analyzed the chemical composition of bones from 103 individuals excavated by other researchers at six prehistoric sites in Peru’s Ayacucho Valley, one of several Andean regions where early civilizations arose.

His data demonstrates that highland residents relied on maize shortly before the rise of the Wari state. A warmer, wetter climate during the Wari period and the spread of terraced cultivation areas may also have spurred maize farming, he suggests.
Click here for the US News & World Report article.
Posted by Gregory LeFever at 12:56 PM