Image of St. Paul Believed to be Earliest 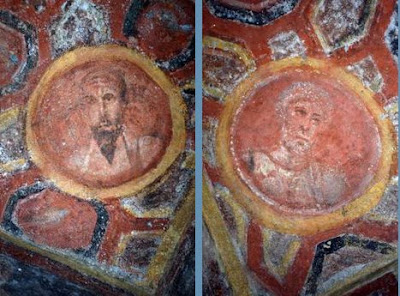 Catacomb's images of St. Paul (left) and St. Peter (right).
Fourth-century images of St. Peter and St. Paul were discovered earlier this month on walls of the Catacomb of Santa Tecla beneath Rome. The image of St. Paul is “the oldest icon in history dedicated to the cult of the Apostle,” according to experts of the Vatican’s Pontifical Commission for Sacred Archaeology.

Christians revere Peter and Paul as the greatest early missionaries. The apostle Peter accompanied Jesus during his lifetime, according the New Testament, while Paul converted to the faith following a blinding vision of Jesus on the road to Damascus in about 33 AD. He preached the faith to pagan Greeks and Romans and was martyred in Rome about 65 AD. Peter is presumed to have been martyred at the order of the Emperor Nero at about the same time.

The discovery of the images in the catacomb was made June 19 and announced yesterday.
Posted by Gregory LeFever at 10:09 AM

Of course, the "earliest" images of "St. Paul" would be of A-POL-lonius of Tyana:

If you doubt this, check out the names of "St. Paul's" sidekick, and Apollonius' comrade.

Even the early Christian church acknowledged the "similarities" of Paul's teachings and Paul's Epistles (Eusebius.)

"St. Peter"? A morphed myth come down from the ancient Egyptian "Ptah."

Be wonderful for all mankind if the dogma of the church was finally removed from so-called education.

maybe we could have a second "Enlightenment"....finally.