Statues of Amenhotep III are Unearthed 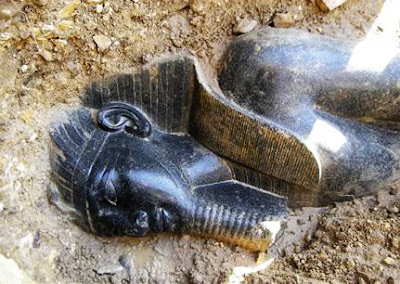 Egyptian and European archaeologists have discovered two statues of King Amenhotep III, who ruled Egypt 3,400 years ago, the Supreme Council for Antiquities said yesterday. Chief Egyptian archaeologist Zahi Hawaas said the first statute was made of black granite, while the second depicts the king in the shape of a Sphinx.

Amenhotep III presided over an era that saw a renaissance in Egyptian art, according to the Reuters report. His son, Akhenaten, was the sun-worshipping pharaoh credited with starting the world's first known monotheistic religion.
Posted by Gregory LeFever at 8:04 AM