Romans Ready to Laugh at Themselves 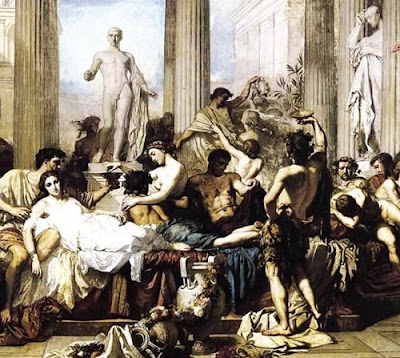 Scene from 'Romans in the Decadence of Empire' by T. Coutoure, 1847.

Two men approached one another on the Appian Way.
“But you’re dead,” one tells the other. “Julius told me so.”
“How can I be dead?" the man says. "I’m standing here talking to you?”
“But Julius is much more reliable.”

It may lose a little in translation, but that’s a rough example of a joke from a 1,600-year-old book of ancient humor entitled Philogelos, or The Laughter Lover. I did an earlier post on the book last year, but Britain’s Guardian newspaper yesterday published an article about it, which has some additional detail.

According to classics professor Mary Beard in the article, the ancient Romans were a race ready to laugh at themselves.

Written in Greek, Philogelos, or The Laughter Lover, dates to the third or fourth century AD, and contains some 260 jokes which Beard said are "very similar" to the jokes we have today, although peopled with different stereotypes – the "egghead", or absent-minded professor, is a particular figure of fun, along with the eunuch, and people with hernias or bad breath.

"They're also poking fun at certain types of foreigners – people from Abdera, a city in Thrace, were very, very stupid, almost as stupid as [they thought] eggheads [were]," said Beard.

Researchers such as Beard continue to ponder how much the cultural differences between Ancient Rome and today may be altering the humorous aspects of the jokes.

Beard, who discovered the title while carrying out research for a new book she's working on about humour in the ancient world, pointed out that when we're told a joke, we make a huge effort to make it funny for ourselves, or it's an admission of failure. "Are we doing that to these Roman jokes? Were they actually laughing at something quite different?”

Click here for the complete article from the Guardian.

Posted by Gregory LeFever at 11:15 AM