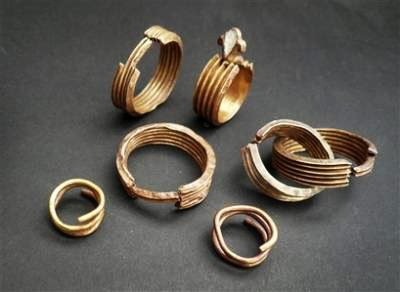 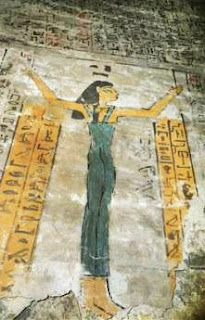 Egyptian officials announced yesterday that archaeologists have found ancient golden jewelry in a pharaonic-era tomb that belonged to a senior official under Egypt's most powerful queen.

Egypt’s Supreme Council of Antiquities says five golden earrings and two rings have been found in the tomb of Gahouti, head of the treasury under Queen Hatshepsut ~ Ancient Egypt’s most powerful queen ~ who ruled 3,500 years ago.(Photo at left shows a painted mural wall in Gahouti's tomb.)

The tomb is located on the west bank of the Nile River in Luxor, a southern Egyptian city famous for its Valley of the Kings and other ruins from pharaonic times. The tomb had been looted, and its gates were engraved with text from the "Book of the Dead," which Egyptians believed would be needed in the afterlife.
Posted by Gregory LeFever at 10:32 AM

Awesome post! I really enjoyed this news. Egypt is a historical country in the world and there is more chance to get more treasures.

Ancient civilizations made use of precious metals, gems and gemstones in the adornment of royalty and as symbols of power and influence for as long as history has been recorded. Cultures have been destroyed and rebuilt because of the massive control, greed, status and wealth gold has exhibited to its beholder. Gold jewelry was highly regarded among the ancient peoples of Mesopotamia, Egypt, Rome and Greece and played a significant role in sociological, archaeological and anthropological development of these societies. The craftsmanship of these ancient masterpieces is unparalleled. The Pre-Columbian societies of North American Indians, Mayans, Incans and Aztecs have also utilized gold jewelry in rituals, hierarchy, mysticism and idolatry. Gold jewelry is referenced throughout biblical, ecclesiastical and religious history in revering or rebelling against God. For more details Sell gold.