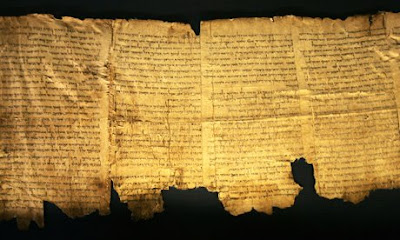 Another scroll fragment found in 1947 near the Dead Sea.

The contention by Hebrew University Prof. Rachel Elior that the Essenes sect never existed continues to stun the world of Biblical scholarship, since the Essenes are reputed to have written the 900 Dead Sea Scrolls and to have influenced the philosophy of Jesus of Nazareth.

TIME magazine has picked up the story, which I'd featured on Ancient Tides earlier this week.

"Sixty years of research have been wasted trying to find the Essenes in the scrolls," Elior tells TIME. "But they didn't exist. This is legend on a legend."

Here, in green, are paragraphs I’ve lifted directly from the TIME article.

So who were the real authors of the Dead Sea Scrolls?

Elior theorizes that the Essenes were really the renegade sons of Zadok, a priestly caste banished from the Temple of Jerusalem by intriguing Greek rulers in 2nd century B.C. When they left, they took the source of their wisdom ~ their scrolls ~ with them.

"In Qumran, the remnants of a huge library were found," Elior says, with some of the early Hebrew texts dating back to the 2nd century B.C. Until the discovery of the Dead Sea Scrolls, the earliest known version of the Old Testament dated back to the 9th century A.D. "The scrolls attest to a biblical priestly heritage," says Elior, who speculates that the scrolls were hidden in Qumran for safekeeping.

Why fabricate the Essenes?

Elior, who teaches Jewish mysticism at Jerusalem's Hebrew University, claims that the Essenes were a fabrication by the 1st century A.D. Jewish-Roman historian Flavius Josephus and that his faulty reporting was passed on as fact throughout the centuries.

Elior contends that Josephus, a former Jewish priest who wrote his history while being held captive in Rome, "wanted to explain to the Romans that the Jews weren't all losers and traitors, that there were many exceptional Jews of religious devotion and heroism. You might say it was the first rebuttal to anti-Semitic literature." She adds, "He was probably inspired by the Spartans. For the Romans, the Spartans were the highest ideal of human behavior, and Josephus wanted to portray Jews who were like the Spartans in their ideals and high virtue."

Click here for the TIME magazine article.
Photo above is Prof. Rachel Elior

"Elior theorizes that the Essenes were really the renegade sons of Zadok, a priestly caste banished from the Temple of Jerusalem by intriguing Greek rulers in 2nd century B.C. When they left, they took the source of their wisdom ~ their scrolls ~ with them."

So, they left any shred of evidence to back up this woman's claim of being the "sons of Zadok?"

How about a shred of evidence there was a "Temple of Jerusalem?"

Don't see it in this article....except some specious and obligatory mention of "anti-semitism" again, from the usual sources.

Hello I enjoyed yoiur article. I think you have some good ideas and everytime i learn something new i dont think it will ever stop always new info , Thanks for all of your hard work!.

Did you cite the Scroll of Zadokite document it was in 1896 that was the first document before the Damascus Document and The Book of Covenant Damascus.