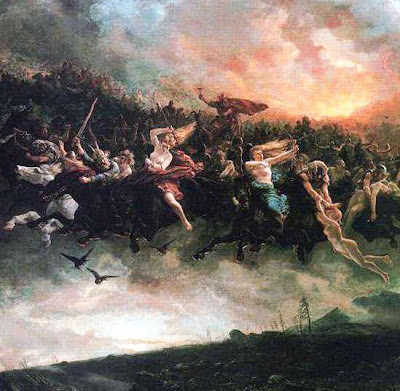 Revisionist scholarship portrays Vikings as cultured settlers of faraway lands who were good at “immigrant assimilation.” A conference last week at Cambridge University discussed more than 20 studies that reveal how the Vikings “shared technology, swapped ideas and often lived side-by-side in relative harmony with their Anglo-Saxon and Celtic contemporaries."

"Some may have come, plundered and left, but those Vikings who decided to settle rather than return to Scandinavia learned the language, inter-married, converted to Christianity and even had ‘praise poetry’ written about them by the Brits,” according to the experts.
Says the British newspaper, the Independent:

They were prolific seafaring explorers, warriors and merchants from Denmark, Norway and Sweden who colonized swathes of Europe from the late 800s to the 12th century. In Norse, the word Viking means piracy and therefore the Vikings have become known as raiders who terrorised Europe instead of disciplined conquerors who established settlements as far afield as Constantinople, Greenland and Newfoundland.

There is archaeological evidence they discovered the Americas 500 years before Christopher Columbus. Their famed narrow longships allowed them to enter countries through rivers and it is this access which allowed them to settle and trade throughout Europe. A stereotyped image as a noble savage emerged in 17th century British texts and then again during the Victorian era. This image later turned into a cartoonish caricature of Vikings as barbarian invaders.

"What is clear is that the popular picture of Vikings is not quite as it seems, and when viewing their long-term presence, it is quite untrue," says Dr. Máire Ní Mhaonaigh, a conference organizer. "The communities were mutually transformed in the process. Of course, there was plundering and pillaging, but those who started to build camps and started to settle began interacting in a very different way."

Click here for the complete article in the Independent online.

Posted by Gregory LeFever at 10:11 AM