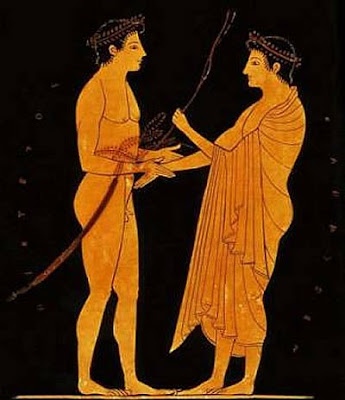 A man buys a slave and a little while later wants to return him. The seller wants to know why and the buyer says because the slave is dead.
"By the gods," answers the slave's seller, "when he was with me, he never did any such thing!"

You might recognize this joke from a 4th Century AD joke book as reminiscent of the popular Monty Python sketch involving a man returning a dead parrot to a pet shop. The 1,600-year-old Philogelos: The Laugh Addict is one of the world's oldest joke books. Many of its 265 gags prove that sex, dimwits, nagging wives and flatulence have been topics of jokes for centuries.

According to a Reuters report:

The manuscript is attributed to a pair of ancient comedians named Hierocles and Philagrius. Little is known about them except that they were most likely the compilers of the jokes, not the original writers, according to Reuters.

Other one-liners in Philogelos may baffle a modern audience, such as a series of jokes about a lettuce, which only make sense in light of the ancient belief it was an aphrodisiac.

Click here for the Reuters article.
Posted by Gregory LeFever at 8:33 AM

A different time, but jokes seem to always have the same theme fitting current circumstances. It now has me thinking what type of political jokes were used through the ages.