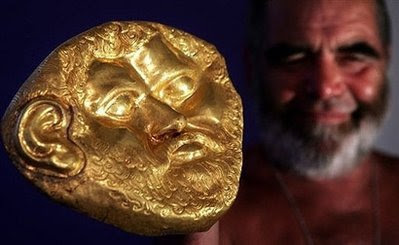 Georgi Kitov holds a 2,500-year-old solid gold Thracian mask he unearthed in the Bulgaria town of Shipka in 2004.
“Life evolves and meanders through the years, like a river running on its way to the ocean of knowledge, and every encounter and bit of wisdom comes in handy sooner or later.”

This profound statement was waiting for me this morning in my email, written by my friend Ludmil Marcov (photo below), who’s a frequent contributor to my Quantum Spirit blog. Ludmil had been contemplating the recent death of the world-famous Bulgarian archaeologist Georgi Kitov, whom he had met several years ago in their homeland.

Ludmil, like Kitov, is Bulgarian. He’s a skilled architect, and since coming to the U.S. several years ago, has made a living creating enchanting home and garden design pieces as part of the Willow Nest business he and his wife Linda have operated in California, Oregon, Washington and now in Burton, Texas.

Ludmil knew Kitov many years ago in Bulgaria. “When I was in college, I took part in many archaeological excavations from Thracian, Roman, Byzantine and Ottoman times,” he writes. “I was part of a team of many specialists and had a wonderful time exploring and learning from different masters in their trades. Working with scholars and craftsmen preserving and restoring the past gave me an appreciation for the past, and many of my skills were developed back then.”

Among those scholars was Georgi Kitov. In his email, Ludmil sent this obituary on Kitov from the online Bulgarian newspaper, The Sophia Echo:

All of his life, he walked through the valley of Thracian kings. Coming as a distant echo from a ghost-ruled tomb, the Thracian royalties spoke to him, called him. He wooed them, diligently hunted for them and promised if they appeared, he would expose them to eternal glory instead. Finally, they revealed themselves, and made him Bulgaria’s most prominent archaeologist, our very own Indiana Jones.

In 2004, reacting to a tipoff that tomb raiders were getting ready to hit a site near Kazanluk, a city 170 km east of Sofia, the Thracian scholar rushed to save, or rather try to be the first who lays hands on whatever was buried under layers of earth. He dug deep and struck gold. A solid life-size mask made of gold, positioned next to a skeleton with chopped up body parts surfaced. Gasping for breath, the archaeologist fought off one single thought that nevertheless kept coming back: Has he found the remains of the Thracian king Teres I (475/445 BCE)? “It can’t be possible,” he gasped for air. “It can’t be possible.”

Kitov was working on the ancient complex and presumable tomb of Thracian king Seuthes III (ca. 330/300 BCE) near the village of Starosel. Since 1992, the archaeologist and his team explored Bulgaria’s Valley of the Kings, a forested region in the central part of the country and nearly 100 km in length. The area is swelled with ancient burial mounds, no doubt left by the Thracians. After numerous mentions in ancient texts and serious archaeological finds to prove the existence of their civilization, Thracian history is still enveloped in mystery.

Ludmil closed his email with an ancient blessing for Georgi Kitov: “I wish him an easy trip over the river Stix in the underworld.”
Click here for the Sophia Echo article.
Click here for the New York Times obituary.
Posted by Gregory LeFever at 12:34 PM