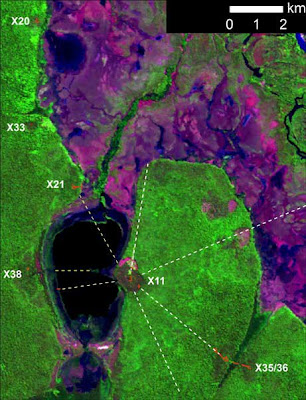 On this satellite photo, lines radiating outward from village earthworks show the organized pattern of pre-Columbian settlements in the Amazon Basin.
Part of the Brazilian Amazon previously thought to be pristine rain forest was actually home to densely packed towns, villages and hamlets in the centuries prior to European exploration.
The newly discovered urban network was at its height between 1250 and 1650 AD and may have housed 50,000 people, scientists are saying. The sophisticated society likely was obliterated by disease carried by European explorers in the 15th and 16th centuries. Today, only isolated tribes and dense jungle remain. 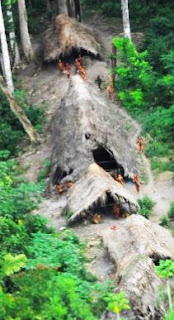 Investigations headed by Michael Heckenberger, an anthropologist at the University of Florida in Gainesville, show at least two major clusters of towns, each with wide roads radiating out to other communities, some of which housed thousands of people. The larger towns were walled like medieval European towns of the same period, Heckenberger said. Between the settlements – which today are completely overgrown – were patchworks of agricultural fields and ponds probably used as fish farms.

“These are far more planned at the regional level than your average medieval town,” Heckenberger said. “Here things are oriented at the same angles and distances across the entire landscape.”

Some archaeologists have argued that Amazonian soils are too poor to have supported large human populations, but the new discoveries add weight to the idea that the Amazon Basin supported large and complex societies.