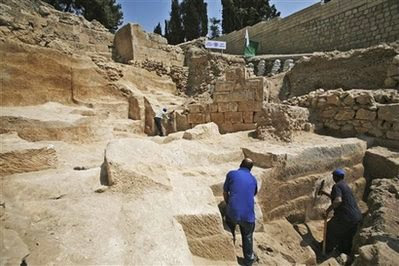 Archaeologists work along the wall unearthed on Mount Zion.
A long-hidden perimeter wall on the south side of Jerusalem was unveiled Wednesday, giving archaeologists a clearer picture of the holy city’s boundaries 2,100 years ago. The wall is 10.5 feet high. Its blocks are not supported by mortar or any other bonding material.

Located on Mount Zion in part of Jerusalem’s Old City, the wall dates back to the Second Jewish Temple, destroyed by Romans in 70 AD, and is part of a 3.5-mile-long fortification around the city. British archaeologists first surveyed the site of the stone defenses in the 19th century. Israeli archaeologists at the current site found a shoe and beer and wine bottles the British left behind.

Posted by Gregory LeFever at 8:43 AM

This is great info to know.