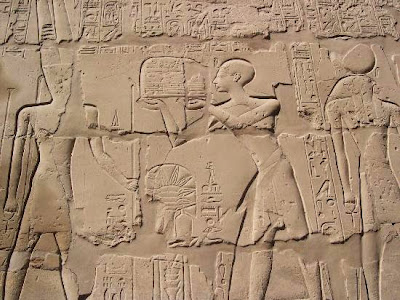 Karnak temple hieroglyphs.
Temples in ancient Egypt were aligned so precisely with astronomical events that people could set their political, economic and religious calendars by them, according to a study of 650 temples dating back to 3000 BC.
For example, New Year coincided with the moment that the winter-solstice sun hit the central sanctuary of the Karnak temple in present-day Luxor, archaeological astronomer Juan Belmonte of the Canaries Astrophysical Institute in Tenerife, Spain, explains in an article in New Scientist magazine.

Hieroglyphs on temple walls have hinted at the use of astronomy in temple architecture, including depictions of the "stretching of the cord" ceremony in which the pharaoh marked out the alignment for the temple with string. But there had been little evidence to support the drawings.
"Somebody would have had to go to the prospective site during a solar, stellar or lunar event ~ as we did ~ to mark out the position that the temple axis should take," Belmonte says. "For the most important temples, this may well have been the pharaoh, as the temple drawings show."

Belmonte and Mosalam Shaltout of the Helwan Observatory in Cairo found that the temples are all aligned according to an astronomically significant event, such as a solstice or equinox, or the rising of Sirius, the brightest star in the sky.
Posted by Gregory LeFever at 3:15 AM