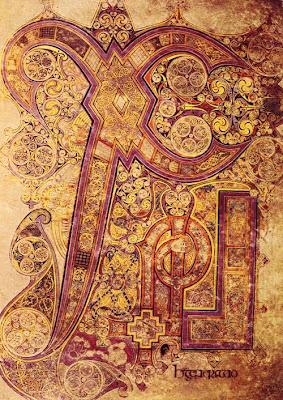 The Chi-Rho page from the Book of Kells, circa 800 AD.
A Cornell paleontologist claims to have solved the mystery of how monks in the 7th and 8th centuries could illustrate manuscripts with details comparable to the finest engravings on a modern dollar bill ~ centuries before magnifying lenses were invented.
Some of the geometric designs are so precise that in some places they contain lines less than half a millimeter apart and nearly perfectly reproduced in repeating patterns ~ leading a later scholar to call them "works not of men, but of angels."

The answer, says Cornell paleontologist John Cisne, may be in the eyes of the creators. The Celtic monks evidently trained their eyes to cross above the plane of the manuscript so they could visually superimpose side-by-side elements of a replicated pattern, and thereby, create 3-D images that magnified differences between the patterns up to 30 times.
The monks could then refine any disparities by minimizing the apparent vertical depth of the images ~ ultimately replicating the design element to submillimeter precision. Cisne proposed the idea in the July 17 issue of the journal Perception.
The paper suggests that the technique, called free-fusion stereocomparison, which takes advantage of the brain's ability to perceive depth by integrating the slightly different views from each eye, was known nearly a thousand years before it was articulated by stereoscope inventor Sir George Wheatstone in the 19th century.

Cisne analyzed the most detailed illuminated manuscripts of the Middle Ages, created between 670 and 800 AD ~ including the circa 800 Book of Kells ~ where some have as many as 30 lines per centimeter.
Click here for the complete Physorg.com article.
Click on the photo to see much more detail.
Posted by Gregory LeFever at 2:44 PM