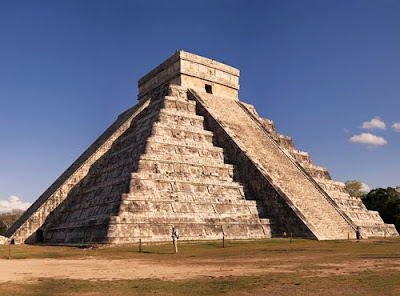 El Castillo possibly a temple to the Mayan rain god Chaac.
Researchers are speculating that the Mayans constructed some of Mexico’s ancient pyramids to reverberate with peculiar “raindrop music” ~ the sound of raindrops falling into a bucket of water ~ as people climbed them.

For years archaeologists have been familiar with the raindrop sounds made by footsteps on El Castillo, a hollow pyramid on the Yucatán Peninsula. But why the steps should sound like this and whether the effect was intentional remained unclear.
According to New Scientist magazine:

To investigate further, Jorge Cruz of the Professional School of Mechanical and Electrical Engineering in Mexico City and Nico Declercq of the Georgia Institute of Technology compared the frequency of sounds made by people walking up El Castillo with those made at the solid, uneven-stepped Moon Pyramid at Teotihuacan in central Mexico.
At each pyramid, they measured the sounds they heard near the base of the pyramid when a student was climbing higher up. Remarkably similar raindrop noises, of similar frequency, were recorded at both pyramids, suggesting that rather than being caused by El Castillo being hollow, the noise is probably caused by sound waves traveling through the steps hitting a corrugated surface, and being diffracted, causing the particular raindrop sound waves to propagate down along the stairs.
El Castillo is widely believed to have been devoted to the feathered serpent god Kukulcan, but Cruz thinks it may also have been a temple to the rain god Chaac. Indeed, a mask of Chaac is found at the top of El Castillo and also in the Moon Pyramid.

"The Mexican pyramids, with some imagination, can be considered musical instruments dating back to the Mayan civilization," says Cruz, although he adds that there is no direct evidence that the Mayans actually played them.
Click here for the New Scientist article.
Posted by Gregory LeFever at 7:39 PM

I think that the Mayans didn't built any of that, many tales said that when they got here many of the ruins were already there, just like in south America, or like Egypt where there is no single text, hieroglyph or anythings that tell that the Egyptians built the pyramids.

I am thoroughly convinced in this said post. I am currently searching for ways in which I could enhance my knowledge in this said topic you have posted here. It does help me a lot knowing that you have shared this information here freely. I love the way the people here interact and shared their opinions too. I would love to track your future posts pertaining to the said topic we are able to read.

Hello, i think that this post is very good, i would like to read more about it